Frank Naligonje is a poet (spoken word), mimicker and actor. He is the last born in a family of three, a brother and sister. Born on 9 December 1989 at Queen Elizabeth’s hospital in Blantyre, Malawi. He was raised in a Christian Family (Seventh Day Adventist). He joined professional acting soon after completing his secondary school education.

He started acting back in the days at school in 2004 and then later he developed the interest of writing and reciting poems. He has worked with a number of artist in as far as arts is concerned and recorded a number of poems including compositions like Don’t Bless The Wedding, Do You Remember Me, Tapiwa, Africa and Lord Our God.

He then joined Oneness Crew comprising of artists like Nesnes, Deward, Donald, Shadow B and himself (Atcheya Naligonje). As Oneness they developed the idea of combining music with poetry which proved to be a successful idea.

He has worked with different theatre companies i.e. Bantu Arts Theatre, Nanzikambe Arts, Logos Theatre and Emancipation Theatre just to mention a few. He later developed an interest of writing and directing plays in various secondary schools and that’s one of his creative works he is also into. 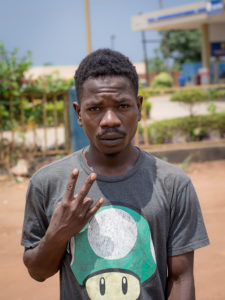